As there is no travel at the moment I thought I might share a little bit of where I live.  I happen to live in what is known as one of the main holiday destinations in Victoria.  The Mornington Peninsula.  Its about an hour a way from Melbourne by car or you can catch the train to Frankston then catch a bus.  That takes a little longer than an hour but you do get to see much more.

There is so much to do down here walk along sandy beaches, visit wineries, breweries and even gin is distilled down here.

In summer there is a huge influx of holiday makers who start coming down here around October and then go home around April to May.  They fill the motels, BNB’s and holiday homes and the areas along the bay are full of campers.  This year thats been put on hold till at least December 2020 but that could change.

The sand is oh so white and the water is crystal clear.  Dolphins, whales and stingrays have all been sighted in the bay and along the rocky coastline. The sunsets are just glorious and many a time we head down to the beach with a wine and sit and take in the views.

The sunsets are glorious along the bay

Over two weeks ago we were advised by our government that Melbourne and the “greater Melbourne” would be going in to stage 4 of lockdown.  So we thought while we could we would take a drive down to Point Nepean and Portsea.  Its about a 15 minute drive from our place in Rosebud.

Stage 4 would be quite severe.  Only 5kms from home could we shop and not more than 5km to go for exercise.  We still had our beach and parks within walking distance but we needed to get out and enjoy the sunshine while we could.

Point Nepean or Portsea  is only about 15 minute drive from our house.  Our first stop was the Portsea backbench.  We parked the car in the car park maybe two other cars were there. Its just a short walk to the viewing platform to see the stunning ocean views and the the London Bridge.  There are many amazing rock formations that are along the Victorian coastline.  London Bridge is one of them.   You can also explore London Bridge but do so at low tide.  The waters around the back beaches are quiet treacherous.

London Bridge is a well known, hollowed out sea stack that can be viewed from a lookout at the end of London Bridge Road. On either side of London Bridge are two high tide platform beaches, backed by 30 to 40 m high calcarenite bluffs and fronted by continuous intertidal rock flats, with reefs further offshore. Waves average 1.7 m on the outer reefs, with their height at the beach depending on the tide. The narrow sand beaches are awash at high tide, but fronted by exposed rock flats at low tide.

There were a couple of lone surfers waiting for that perfect wave.  They must have belonged to the two cars in the car park. 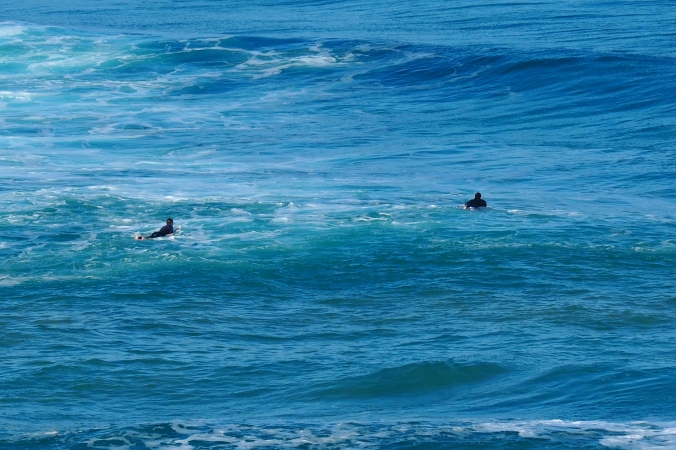 Two surfers paddling out for that decent wave

When you research this area it says time and time again that waves for surfers are not suitable.  Tell that to the surfers above, just before this picture was taken I watched them surf in.  Looked pretty decent to me.  It does also say swimming is not suitable due to the strong currents and outer reefs and all the rocks right up to the cliffs.  A strong swimmer myself I wouldn’t be swimming here.

You can fish off the flat rocks along the beach but do take care.  Those waves can be treacherous and many a fisherman has come to grief along the Victorian coastline.

Here is a link on the  London Bridge

We then drove to the Point Nepean only about a 5min drive from the London Bridge.  There are so many things you can do but the one thing you can not do is take your dogs there.  National Parks in Victoria are off limits to dogs.  You are not even allowed to have them in the car with you.  I find that rule just quite simply silly!

I took a couple of pictures of the quarantine station.  It was all cordoned off – I thought it was because of stage 3 restrictions but it is due to renovations taking place. Perhaps it should be used as a quarantine station again?  What do you think.  The last time anyone stayed there was in the 1990’s were over 400 Kosovars, refugees from the Bosnian War of 1992-95.  By June 1999 they were finally allowed home.

During World War 11 the army was billeted at the station.  Hence rifle ranges still there.

There are many walks you can do at Point Nepean or what a lot of us call the Quarantine Station.  We have decided that once this lockdown is over we will go and do some.  Will have to leave our dogs at home.

Point Nepean National Park is the most westerly point on the Mornington Peninsula and sits on one of the most treacherous coastlines in Victoria. Point Nepean played an important role in shaping the early settlement and defence of Australia. Walk or cycle through this rugged coastal landscape and learn about the history of the Quarantine Station, Fort Nepean and their surroundings. Explore military forts and tunnels, learn about the people who passed through the Quarantine Station — and see fascinating artefacts spanning back over 150 years. Or jump aboard the hop-on-hop-off Point Nepean shuttle service. Running between the Quarantine Station and Fort Nepean, it’s a great way to explore all the highlights of Point Nepean National Park.

Here is a link for more information on the  Quarantine Station

On the way home we stopped off in Sorrento where you can catch the ferry to Queenscliff.  Its a 40 minute trip and you may spy a dolphin or a seal on the way over.  Queenscliff is the gateway to the Great Ocean Road.

A seal sunning himself in the beautiful colors of the Bay

* Today marks 4 years of blogging as 3sistersabroad.  Wordpress kindly reminded me.  We have gone from just a few views and shares to such a huge following.  The 3 sisters thank you for you kind words, your follows and your shares.  We hope to be blogging for many more years.  *

28 thoughts on “Point Nepean & Portsea on the Mornington Peninsula Victoria”