Another early start thank goodness breakfast was lovely lots of gluten free food and I was given a wrapped gluten free biscuit with choc chips to have later.

After an hour and half  our coach pulled into a roadside stop for those us to have a quick toilet break.

Our next stop was in the Castilla La Mancha region and the historic town of Consuegra. Twelve windmills can be found on the Cerro Calderico mountain range next to a 12 Century medieval castle. 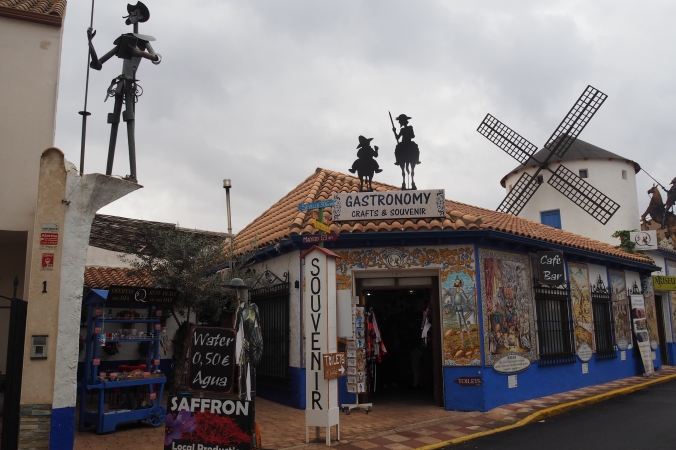 The town is dedicated to the Windmills and Don Quixote.

The above shop is where you could purchash something to eat for those who were hungry and or  souvenirs etc.

I purchased some drink coasters all dedicated to Don Quixote.  Made with Portuguese cork, we use them all the time.

We did have time to have a bit of a wander around before getting back on the coach/bus. 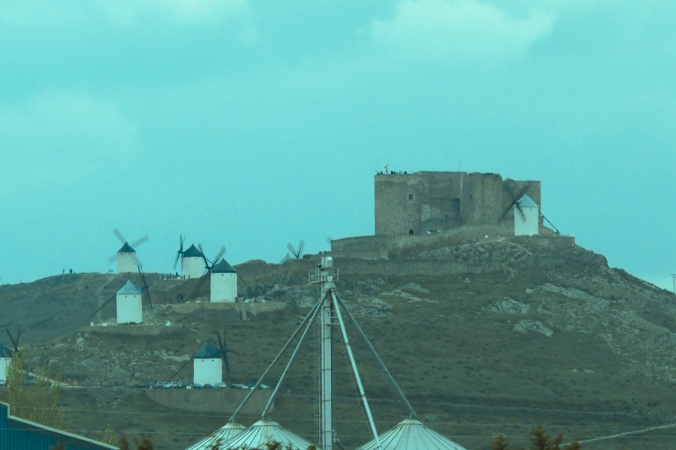 The Windmills and the Castle

Coming from Australia I had no idea that Spain had windmills.  Where I lived in Perth there was one in South Perth right by the Swan River.  I remember as a child going over there for picnics either on the ferry or by car.  So to see all these windmills was certainly an exciting part of the trip.

You should have seen all the camera’s clicking on the coach, lucky there were only a few of us.

These windmills in Consuegra are believed to be the ones described by Miguel de Cervantes in his famous 17th Century novel Don Quixote.

Have you read the Novel Don Quixote?  Don Quixote believes the windmills were giants but they were turned into windmills by his nemesis, a magician named Friston. 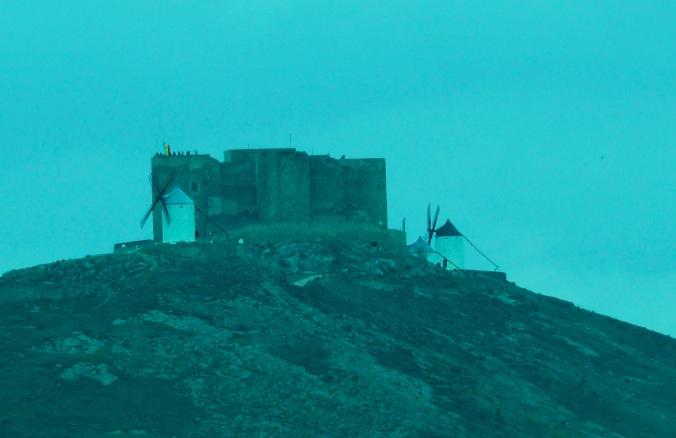 Taken from the coach as we were heading to Toledo.

The windmills have since been lovingly restored. One of them houses a gift shop while another is a small museum. There’s even a working mill so one can see how they work.

You can either hike up to them or drive and there are also guided tours.  Unfortunately (again) we didn’t get the opportunity to visit the windmills.  However, I did manage to take a few photos as we drove past – our coach driver did slow down so we could.

Consuegra is about 2 hours away from Madrid and an hour from Toledo so you could visit for a day.

*Oh remember that wrapped gluten free chocolate biscuit I was given for the trip?  Opened it up and it was full of mould.  Lucky I had also purchased some gluten free alcohol filled chocolate chews at the first stop we had for the day.*

9 thoughts on “The Windmills of Consuegra Spain”