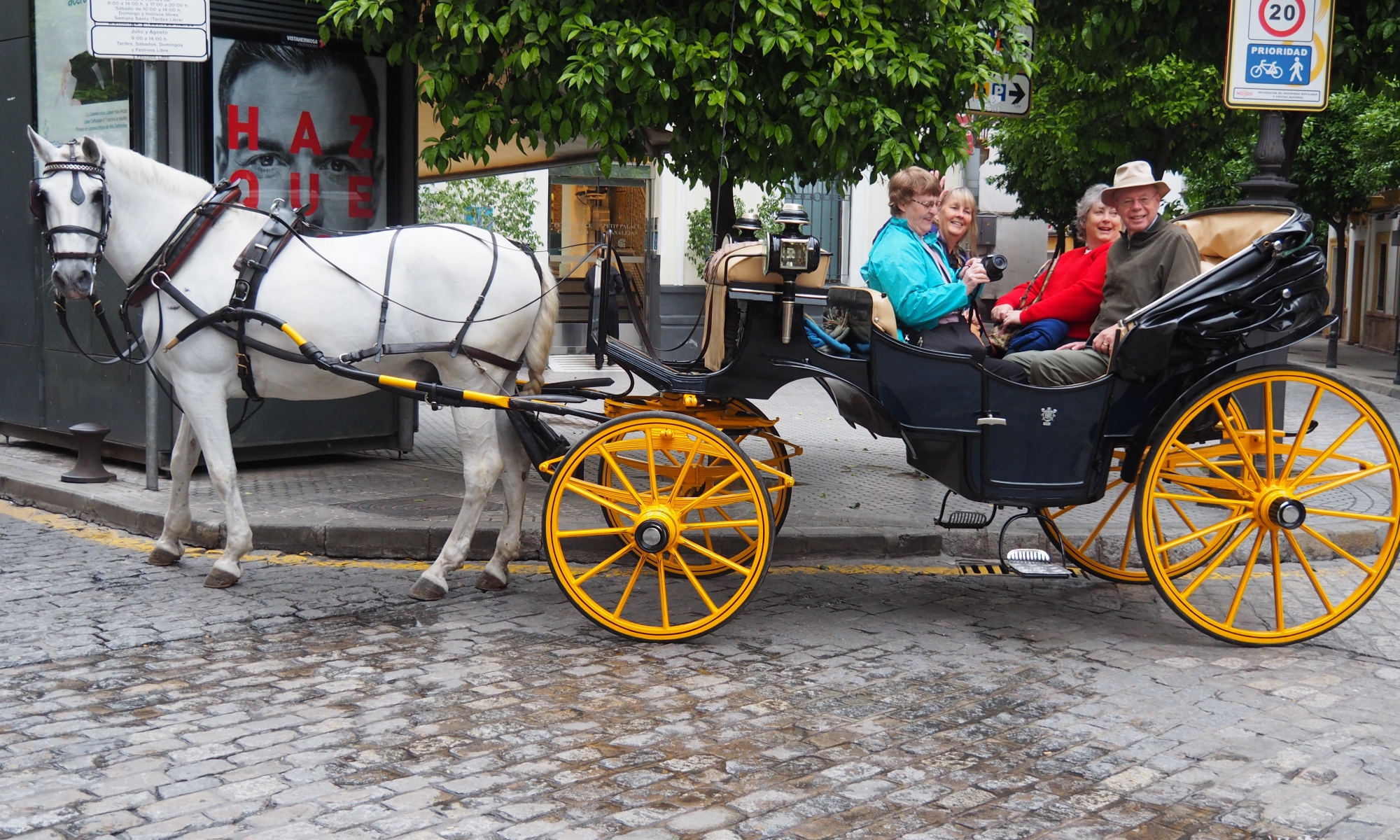 This was our last morning in Seville, and it would be a busy one.  Breakfast was early as we had to check our bags onto the coach.  Due to the Easter Celebrations our coach was only allowed to be parked in the side street for 20 minutes.  We would meet up with our coach near the Jardines de Murillo.

Climbing  aboard horse drawn carriages to be taken through the City of Seville  Our first stop would be the Plaza de Espana which  was built in 1928 for the Ibero-American Exposition (Worlds Fair) of 1929. The Plaza is in the Parque de María Luisa, in Seville. This was an amazing way to see Seville sitting in a horse drawn carriage.

The Plaza de España has been used in film locations, including scenes for the 1962 movie Lawrence of Arabia.  The building was also used as a location in the Star Wars movie series Star Wars; Episode 11 – Attack of the Clones – 2002.  Simple Red’s song Something Got me Started was also filmed at the Plaza.

There is a moat that has numerous bridges over it representing the four ancient kingdoms of Spain.  In summer they have little paddle boats on the moat.

In no time at all we were back in our horse and carriages on our way to the Royal Alcazar of Seville.

The Royal Alcazars of Seville – historically known as al-Qasr al-Muriq.  It originally was a Moorish fort now a Royal Palace. The upper levels of the Alcázar are still used by the royal family as the official Seville residence.

It was registered in 1987 by UNESCO as a World Heritage Site along with adjoining Seville Cathedral and the General Archive of Indies.

The Tapestry Hall was completely destroyed after the Lisbon earthquake in 1755 and was remodelled by Sebastian Van Der Borcht. The tapestries that decorate the room are an exact replica of the original “The conquest of Tunisia” commissioned by Carlos V after his victory in 1535. The originals were woven in the workshop of Wilhelm Pannemaker, between 1548 and 1554. The tapestries exposed today were commissioned by Philip V during the eighteenth century to the Royal Tapestry Factory of Santa Barbara.

The Royal Alcazar of Seville took my breathe away.  Such beauty in every courtyard and room.  For those of you who have watched Game of Thrones you probably already know that The Royal Alcazar featured in the series. The palace stood in for the Water Gardens of Dorne in various scenes in four episodes of Season Five and one of Season Six.

More photos of Seville will be on our Instagram page.

It had been a whirlwind crazy two days in Seville.  Yes our Itinerary had to be changed due to the Easter celebrations but we still saw and did everything you could in two short days.

Our next stop would be Ronda for lunch and a tour of the city.