On the Tuesday of Day 6 of our cruise we were all going to Salamanca. This city is the capital of Salamanca province and is part of the Castile and León region. It is classed as an UNESCO World Heritage sight. It began very humbly during the Iron Age, and, over the years, included many economic crises and also the War of Spanish Succession.

Although this city was in Spain and we were actually cruising in Portugal, we had docked the previous day at Vega de Terron, the last port of call before sailing back to Porto.

As a small village it was besieged by Hannibal in 220BC and then ruled by Rome. Originally it was named Helmetica. The city of Salamanca is home to one of the oldest universities in Europe and has many international students. It is the seat of the Spanish language and very much a lively student town.

We boarded the coach in Vega de Terron and travelled to the beautiful golden city for a guided walking tour. Bree was too sick to go with us – as were a few of the other passengers. The coach ride was over an hour through the countryside because Salamanca is 80 km from the Portuguese border. We travelled across the Puente Romano bridge built in 1AD. This is the entry point to the city from the main highway.

You might be interested to know that Christopher Columbus and Cortés both lectured at the University which was founded in 1218. It is the oldest in Spain and the 3rd oldest in Europe.

Once again coaches, buses and many larger cars are not allowed on the streets, so we had to park quite a way from the bright orange sandstone buildings and walk the streets with the rain coming down as usual.

However, that meant our guided walking tour would encompass a lot. Passing through its grand squares and medieval structures, you feel that you have stepped back in time.

Firstly, we visited the Plaza Mayor, a massive baroque square which we would revisit for lunch.

Then down the road to the Casa de las Conchas with its ornate shell designs. It was originally a Spanish Gothic Palace – now the Public Library and closed.

Public Library and the shells

Shell design on the Library

Further down we begin our search for the frog sculpted in the University wall located in the extreme right of the largest column, above the level of the busts, and to the top left of the skulls. Bit difficult to photograph because of the rain. However, you might see a very modern design – that of an astronaut on the cathedral door. The frog design is considered by the University students to be very lucky and their wishes, thankyou’s and prayers are written in red on the walls. In the olden days this was blood.

Once we had walked around most of the ornate cathedrals, the monastery and the university and listened to the stories about them from our guide, we then walked back to the Plaza Mayor for lunch.

The Restaurant for lunch

Some of our lunch

The “Tastes of Spain” experience lunch was accompanied by an energetic Flamenco dance performance.

Tapas bars feature on every street and traditional Spanish music trickles out of buzzing bars and restaurants.

After lunch we were able to have a look at everything by ourselves though we only had a short time before we had to get back on the coach. I went for a walk with fellow travelers Sarah and Peter.

Plaza Mayor in the sun

The sun had finally come out and the Plaza Mayor square now had quite a lot of tourists. Even the cafes had put out the chairs and tables. There were quite a few young students around answering questions on a sheet. I spoke to several and they said that they were on a school camp and had come from France – the questions were part of a lesson on Spain. All schools were on holidays in Spain and Portugal for Easter and this is the most important time of the year with huge Easter evening parades.

After looking at the many cafes around the square we found one that was selling icecream and decided that an icecream would be lovely. 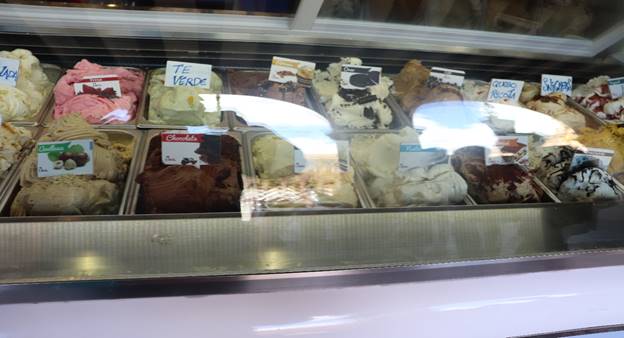 Peter paid for mine and I thoroughly enjoyed it. The three of us sat down at one of the tables. A short while later a very rude waiter came out and yelled at us.

Typical of Spain – sorry – we found this in some other places of Spain as well.

Just as this was happening our city guide came and said that it was time to go back to the coach, So we did and apart for the last five minutes it was a very enjoyable day.