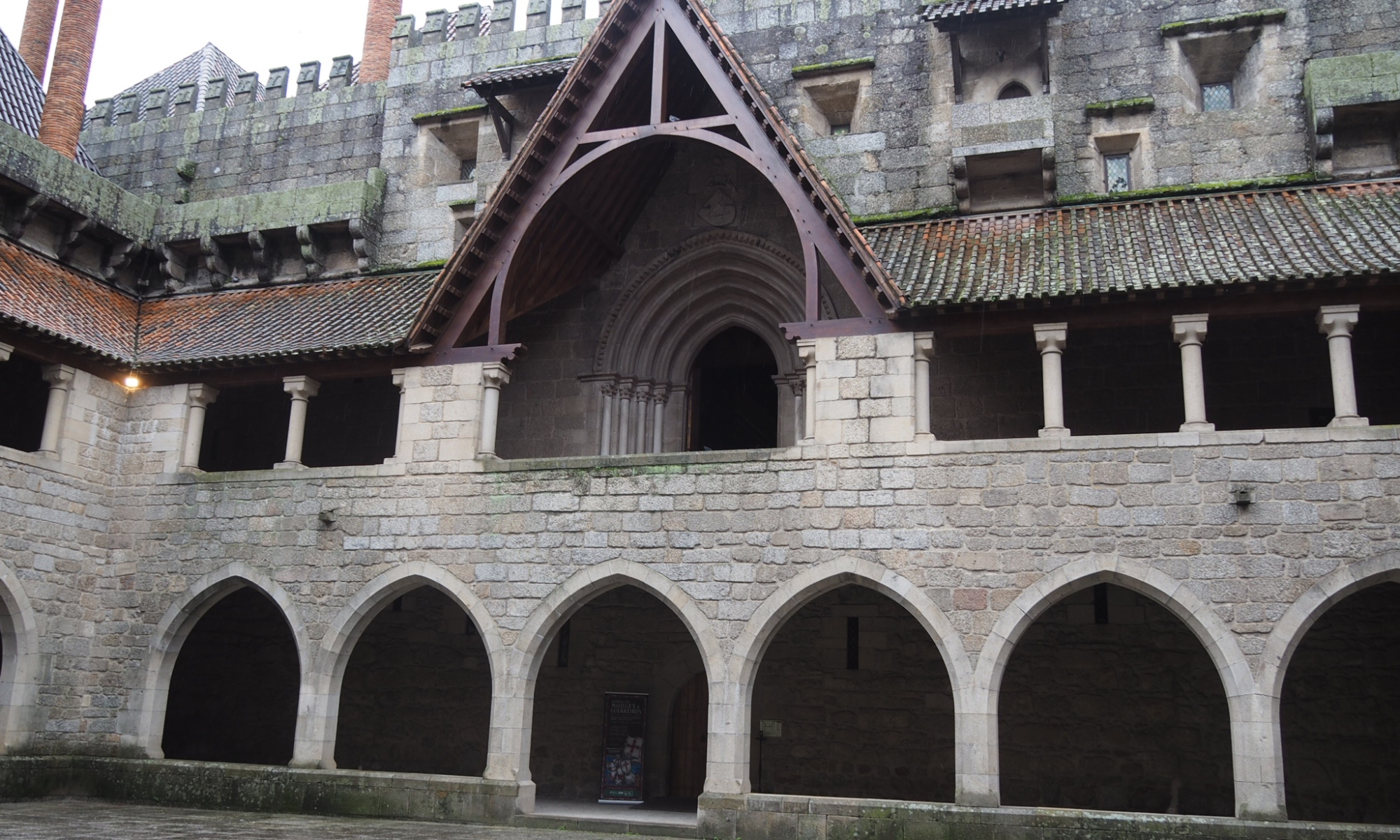 We woke up to a wet and very cold day.  My biggest worry was those cobble stones, they can be very slippery.  Needn’t have worried, the coblestones in Portugal are very rough not shiny and slippery like in France.

Our coach stopped near the Palace of the Dukes of Braganza.  What an impressive place this was.

The Palace of the Dukes of Braganza was constructed on the orders of Afonso de Barcelos, an illegitimate son of King João I, in the early 15th century from about 1420.

The design was based on French Manor Houses.  Between the 16th and 19th centuries the palace fell into ruin and many of the buildings were taken away to be used for other purposes.  A reconstruction was completed between the years of 1937 and 1959 which conferred a grandeur on the property which it probably never possessed. Indeed, it is believed the original building was not complete when the Duke decamped to Vila Viçosa.
The architect was Rogerio de Acevedo.

After the renovation it became the official residence of the President of the Republic.

The interior contains collections of furniture, carpets and copies of the Pastrana tapestries, these depict the Portuguese invasion of North Africa.

Some of the furniture on display (writing tables and chests of drawers) was made in Portugal’s colonies in India, China and the Far East  There are also Flemish and French tapestries, ceramics acquired by the Portuguese East India Company in China and various weapons and armour.

The above bedchamber pays homage to Catherine of Braganza, even though she never lived in the Palace. Catherine is the daughter of King Joao of 1V, Princess of Portugal and Queen of England.

When Catherine married Charles 11 of England in 1662, she got into the habit of drinking tea, she also added porcelain to English customs, the fork at the table of the court.  The taste for Italian opera.  The creation of the famous English marmalade as well as making fans and tobacco popular.

After our visit to Palace of the Dukes Braganza we  walked down to the main square along narrow cobblestone streets.  By now the rain was pouring down.  There were rivers of water flowing fast along the streets.  We all huddled under some buildings while our guide Carla explained some interesting facts about Guimaraes.  Did you know that it was settled around the 9th Century and used to be known as Vimaranes. Its historical centre  is a UNESCO World Heritage Site, making it one of the largest tourist centers in the region.

While we were standing in the rain Muriel looked down and saw something shiny in the cobblestone.  Was it gold?  It got everyone looking and trying to get that shiny bit of something out.  Were we all going to be rich?

Sorry to disappoint everyone,  it turned out to be a bit of shiny paper from a lolly wrapper.

It certainly caused a lot of silly jokes about Muriel and her quest for gold.

Free time to explore the market that was being held under the buildings or to go back to the little laneways and all the amazing stores selling locally made goods.

We all made our way to the main street to wait for our coach to take us back to the Scenic Azure.

Many towns in Spain and Portugal don’t allow cars or busses into the historic sections due to the small narrow laneways.

The above photo to the right is where our coach picked us up.  What a stunning garden.

**Our next post will be on our Tour to St John of Tarouca and the fortified bridge of Ucanha.**