Montmarte…I fell in love with this bohemian village on our first trip to Paris. A place where poets, artists and writers lived as it was a cheap place to live.  I could imagine sitting in one of the many cafes in a past life writing about the people I saw each day.  Joining me would be some of the most famous artist’s such as Auguste Renoir, Vincent van Gough, Henri de Toulouse-Lautrec , Suzanne Valadon  and Picasso to name just a few.

Our trip to the top would be via the Petit Train, it would weave in an out the streets of Montmartre making its way to the top.  We caught it right near Moulin Rouge and the trip finished out the front of the Sacre Coure 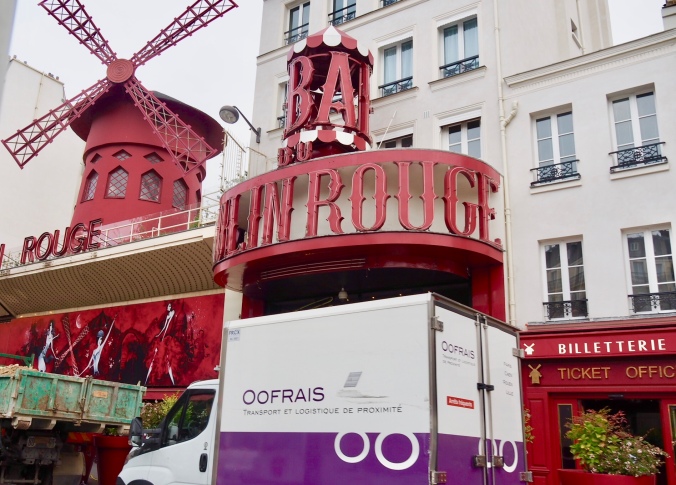 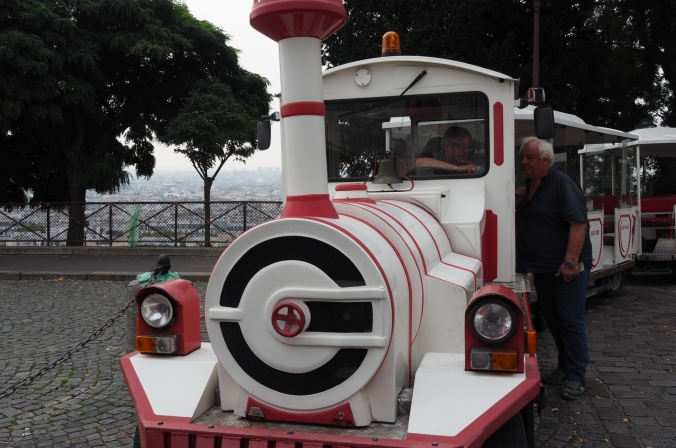 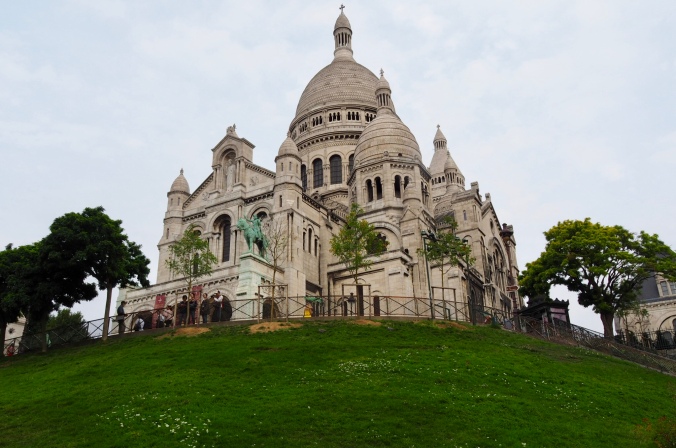 Basilica of the Sacred Heart of Paris – Sacré-Cœur

The Sacré-Cœur is the second most visited monument in Paris. It is at the highest point in Paris.  The views over Paris are stunning.  Yet both times I have been there its been overcast. Inside the Sacré-Cœur is nothing short of stunning.  This time I actually took a photo, well I took a few but only one worked out. I must work on my photography skills for inside buildings. 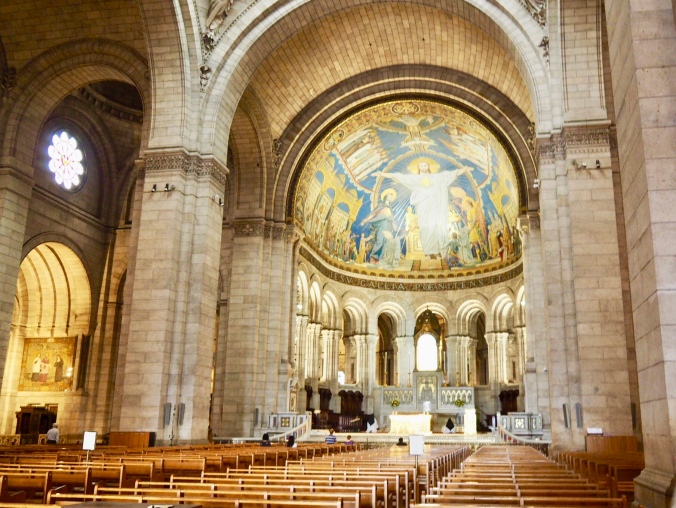 I’m sure you have seen photos of La Maison Rose on social media.  I know I have.  I always wondered what its story was.  Is it because its pink?

La Maison Rose isn’t too far from Sacré-Cœur and you can get both in the shot depending on where you stand.  Picasso used to visit La Maison on a regular basis.  Maybe this is where I thought I sat with my coffee in a past life? 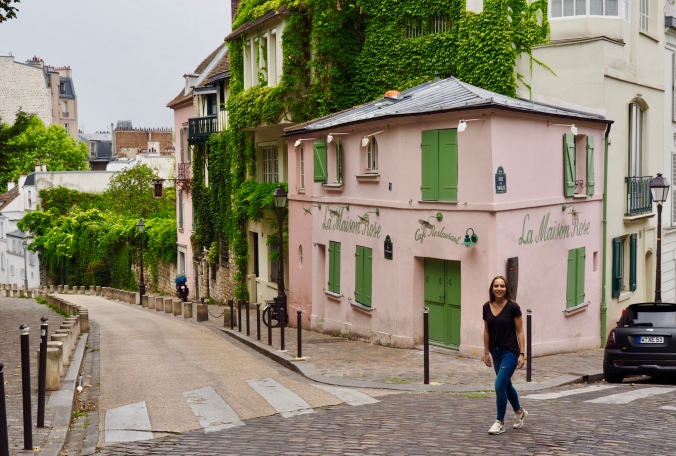 The girl in the photo was a passerby perhaps a local.  Looks can be deceiving. It looks quiet in the street, yet behind me there were loads of people all trying to get “that shot”

As we made our way along the cobblestone streets we passed a tribute to Van Gough. 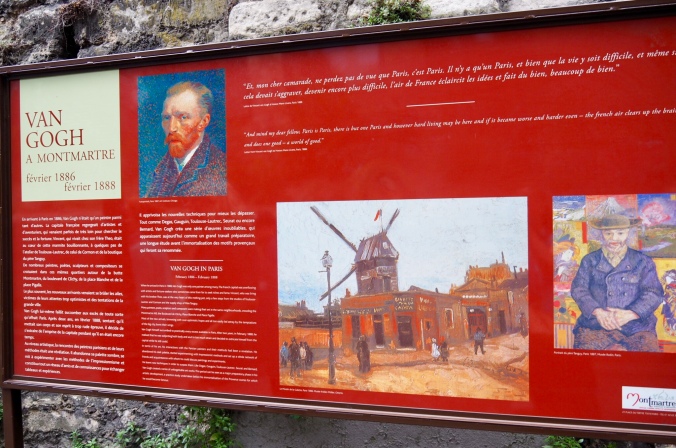 There are two windmills out of a dozen or so still there in Montmartre. Le Moulin Blute-Fin’ and ‘Le Moulin Radet were built-in the 17th century.  I was able to get a shot not that good but still.

These windmills over the years have been painted by some of the most famous artists such as Van Gough. 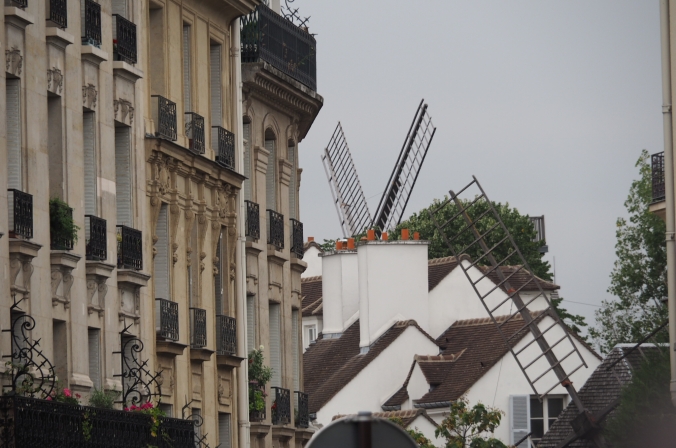 Here is a tip:  Public toilets are far and few between and Montmartre there are none.  So if you do need to go, head to cafe get a drink and use the toilets.  Also, a lot are downstairs and the stairs can be quite steep.  We managed to find a cafe that the toilets were on the same level.

We enjoyed a coffee and a creme brulee each.  I thought I took a photo but perhaps I didn’t, it was lovely though.   We sat outside and watched everyone walk by.  Fascinating! 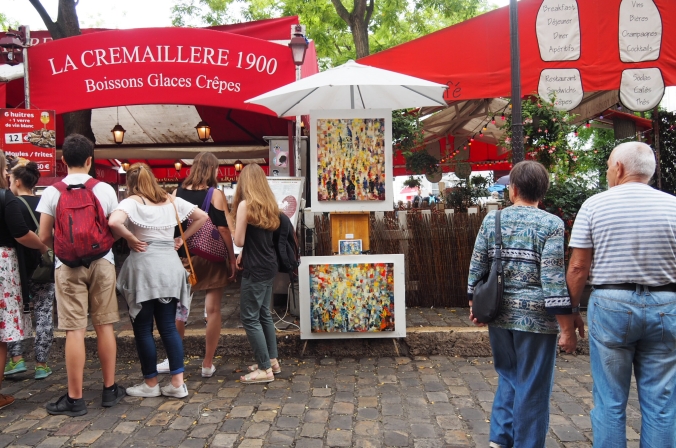 Our view while having a coffee and a Crème brûlée 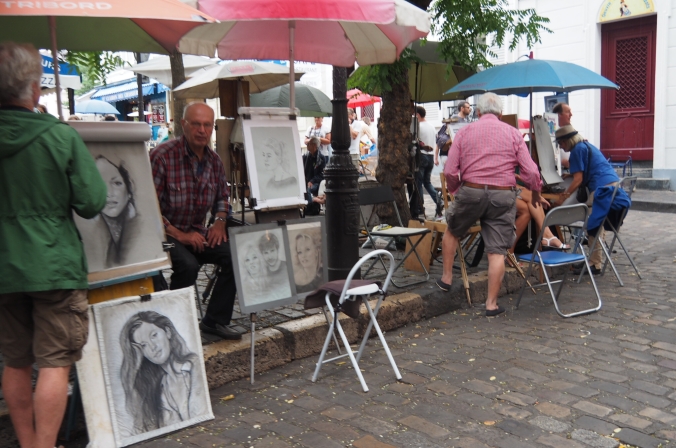 This square is part of the reason I fell in love with Montmartre, cafes and artists everywhere.

Amazing clothing shops and one Nina Kendosa is where  in 2016 I purchased a skirt.  We couldn’t find it again, typical.  So I thought the shop had closed down.   Once home, I checked online and to my dismay I discovered it’s still open and doing a roaring trade.  2020 here I come!

France has a etiquette when dinning.  The seats out the front of cafe’s, is where you can sit and enjoy a coffee.  Inside you will find tables with paper and or tablecloths.  If you wish to sit at a table with a tablecloth, you will be expected to order and have 3 courses.

When I visited the bathroom inside the cafe I saw courtyard and it looked so pretty.  So I asked the waiter if we could sit there.  He said yes of course you can.  He wasnt aware we had already ordered a coffee for the front of the restaurant.  Oh dear, things nearly got awful.  Those tables in the courtyard were for diners who would eat and drink all afternoon.  Our waiter  became so  angry his arms were flaying around his head.  I thought his eyes were going to leap out and run away.  Somehow I managed in my broken French to calm him down.  I think I fluttered my eyes at him, lightly touched him on his wrist with a finger and then we both laughed.

We wandered around some more before making our way back to the ship. Little did we know how far we would be walking.  More on that in the next post. 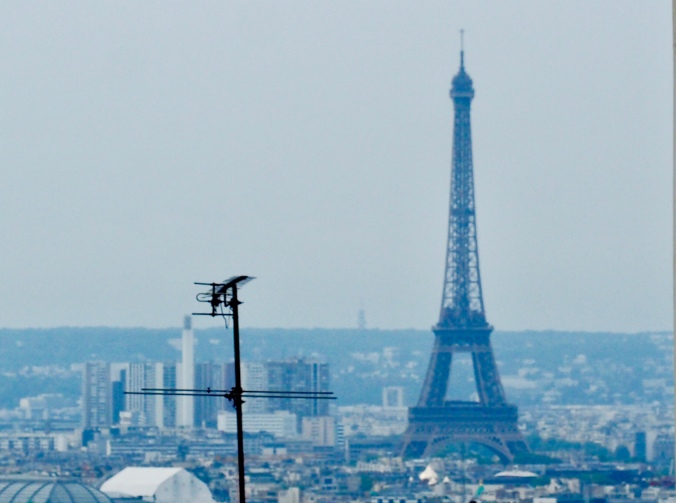 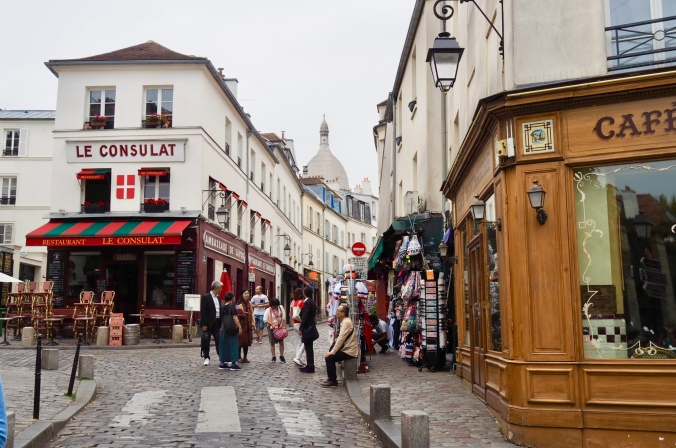 Le Consulate Montmartre, another  cafe that has had many famous artists such as Monet, Picasso, Van Gough and Toulouse-Lautrec. 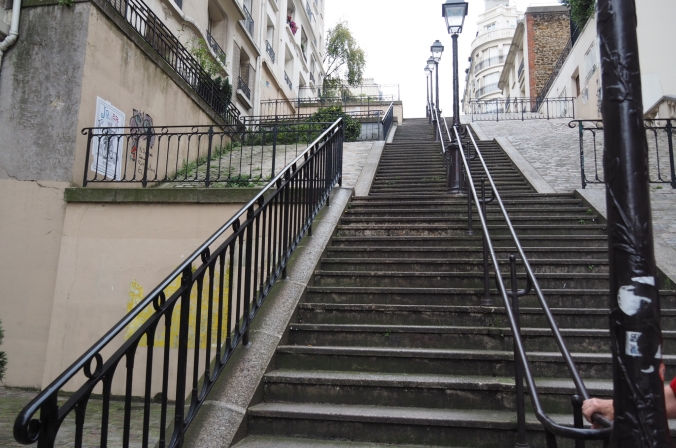 The steps at Montmartre

Of course more photos will be on Instagram.  Thank you so much for stopping by.