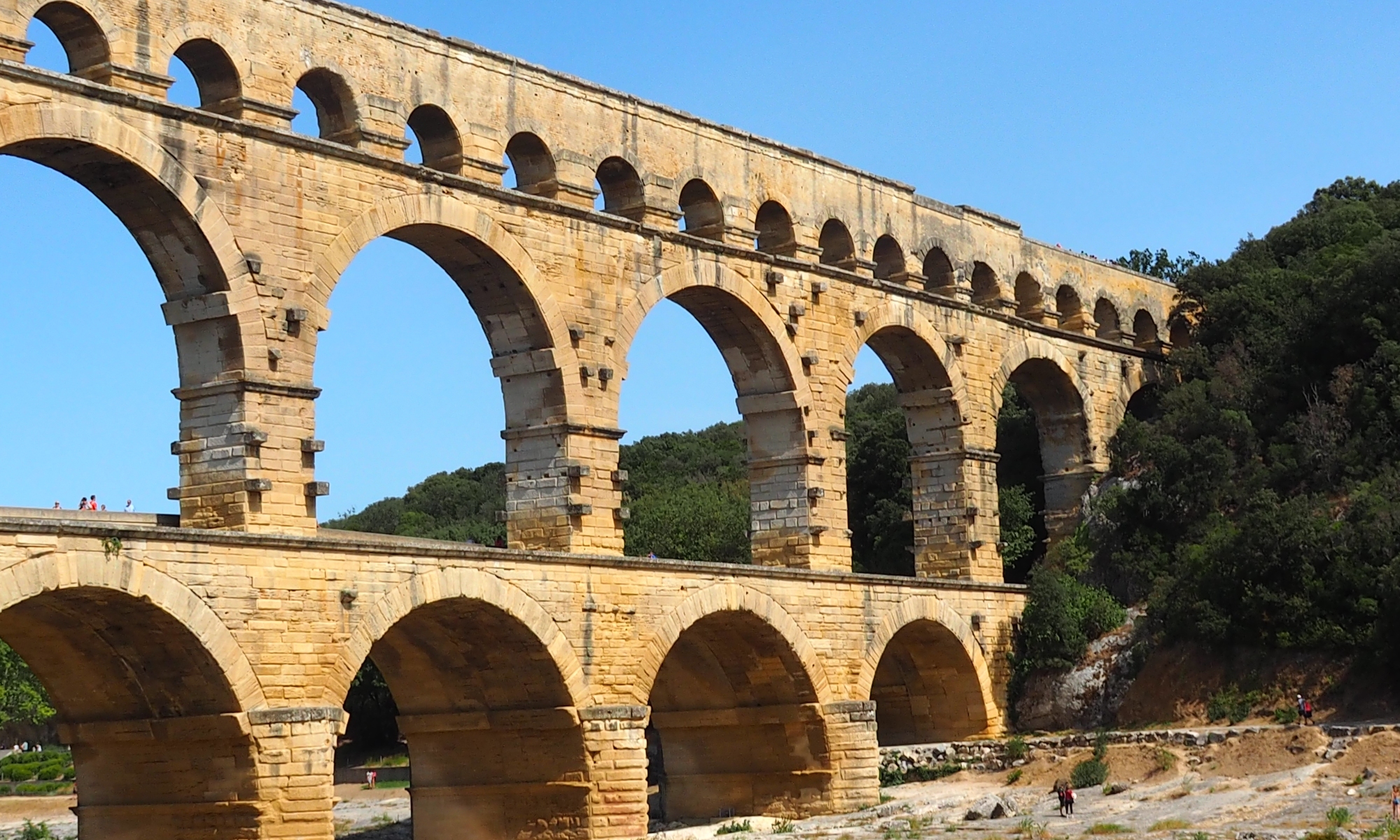 After lunch and a few cold drinks – it was very hot down in the south of France last August.  There were two afternoon excursions a trip to the Pont du Gard Roman Aqueduct bridge or Chateauneuf du Pape: Town and vineyard tour with wine tasting.  MMMH choices…an old bridge or wine.   The bridge won,  as we can have bucket loads of wine on the ship.

Having watched the movie “Paris Can Wait” on the flight over I was extremely excited to see the amazing bridge. Pont du Gard was featured on the film. On the cruise the year before in 2016 our cruise director and friend Richard had talked about the Pont Du Gard in length. I had researched so much before this holiday.  The photos were out of this world of this giant aqueduct.  Hope mine come somewhere near the professionals.

Where the coach drops you off you do not see a thing.  Nothing!  Apart from countryside which is very beautiful I will say.

As we walked along the path I saw this, I’m sorry it’s not a very good picture.  I meant to go back and take another before we left, but somehow I forgot. I think it was because I spent our last few moments in the souvenir shop before boarding the coach.

of all the victims

after the terrorist attacks in Paris.

Part of the tour was the museum at Pont du Gard.  We were to visit here first before heading to the giant aqueduct.  It gives the history of the Roman aqueduct with Models, virtual reconstructions, multimedia screens and sounds. As you wander around and learn how they built this amazing construction you realise that what your about to see is something truly wonderful.

I could feel the excitement welling inside.  Oh, is that a  glimpse through the trees!

As we walked around the bend this was our view!

It’s such an amazing place, I hope the photos do it justice.

As we crossed over to the other side we noticed a cave.

The Pont du Gard was teeming with people.  Tourists and locals alike.  For those who live nearby this is their swimming hole. You can visit the Pont du Gard on both sides, plenty of parking.

If you visit this giant Aqueduct in the summer months in France be sure to take your bathers.  As you can see in the photos we are in long pants and runners.  Peter, Tania’s husband walked out into the water.  He said it was lovely and cold.

I so wanted to get into the water, I have promised myself if I ever go there again I will.

A bit of history –

The Pont du Gard is one of the world’s best preserved examples of Roman ingenuity.  Its turbulent history has also inspired numerous artists.  It required hundreds of workers both skilled and unskilled over many years. It included stonemasons, carpenters, blacksmiths etc.  It was built halfway through the 1st century AD. It is the principal construction in a 50 m long aqueduct that supplied the city of Nimes formerly known as Nemausus, with water.

It was built as a 3 level aqueduct standing 50m high.  It allowed water to flow across the River Gardon.  Its construction is of soft yellow limestone blocks, taken from a nearby quarry that borders the river. The highest part of the bridge is made out of breeze blocks joined together with mortar.  It is topped by a device designed to bear the water channel whose stone slabs are covered with calcium deposits. This 3 story bridge which measures 360m at its longest point along the top. The Roman architects and hydraulic engineers created a technical masterpiece that stands today as a work of art.

Today, we know that over 21,000 cubic meters of rock, weighing 50,400 tonnes. (go back and look at the photos – the mind is boggling at what they did back then) They also found numbering on the stones, points of support for scaffolding and evidence of the use of hoists.  Materials used in the construction of the Pont du Gard were obtained from the Estel quarry, situated roughly 600m away. The rock found there is a soft coarse yellow limestone, referred to locally today as “pierre de Vers”.  The blocks of limestone were extracted using picks and sharp metal corners. Around 120,000 cubic meters of cut stone were extracted, not only to build the Pont du Gard, but also to construct the various bridges and culvert supports that went into making the aqueduct that stands downstream on the right bank. Another advantage of the stone quarry’s location on the edge of the Garden river was that the rock could be transported by boat to the building site on the river’s right bank.

The above history notes taken from our Daily Planner on the ship.

23 Replies to “Be prepared to be amazed at the Pont du Gard!”