Avignon, a city in southeastern France’s Provence region, is set on the Rhône River. From 1309 to 1377, it was the seat of the Catholic popes. It remained under papal rule until becoming part of France in 1791. This legacy can be seen in the massive Palais des Papes (Popes’ Palace) in the city center, which is surrounded by medieval stone ramparts.

The Avignon city walls constitute the 2nd longest continuous wall in the world, after the Great Wall of China. It is 4.3 km’s long!

Our tour would start with a walking tour of the City before heading to the Palace of the Popes.

As you walk through one of the many passages of the Wall surrounding Avignon you begin to realize what an amazing place it is.  Many tourist pages on Avignon say once you stay you won’t want to leave.  I can agree with that.  Although if you read all my posts I want to stay at every village we visit.  I’m sure you the reader will also think the same once you get the opportunity to visit France.

Once inside it’s a maze of tiny little streets with many shops and cafes.

Then you come to a huge square called Place de l’Horloge. Here, you find the City Hall built between 1845 and 1851 over a former cardinal’s palace of which it has kept the old fortified tower, transformed into a belfry in the 15th century with clock and Jacquemart. Next to it, the municipal theatre, also from the 19th century, houses the Avignon opera and, all the way at the top, the delightful Belle Époque style carousel still turns.

Originally the forum of Avenio, the city’s name under the Romans in the 1st century BC, the  Place de l’Horloge is still the “centre” of Avignon. A meeting place, bordered by cafés and restaurants, the square is always bustling. Just like the Place du Palais higher up, a vast esplanade where you could spend the day just watching all the street performers in summer.

“The Palace of the Popes is the biggest building ever built during the Gothic period. It stands in powerful testimony to the presence of 9 popes who lived in and reigned from Avignon in the 1300’s. Construction of the Palace took less than 20 years, and took place between 1335 and 1352. Two popes were the primary builders of the Palace: Pope Benedict XII, who built the first pontifical palace (now referred to as the “Old Palace”), and Pope Clement VI who built new extensions, referred to as the “New Palace”.”

Photos are not allowed of these Frescoes unless you use no flash. As it is not very light in the Palace I decided to not even bother.  The flash of cameras destroy’s the Frescoes.  As we went through the palace they had TV screens with a story of the Palace and the Frescoes.  Here is one I took. 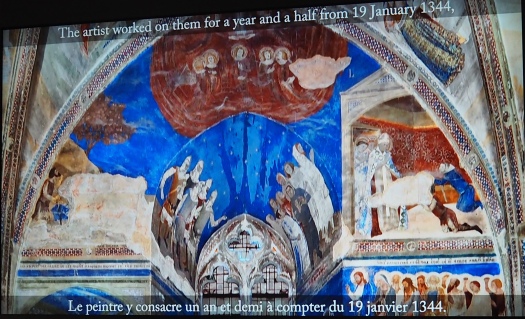 However, you see so many tourists taking photos with flash.  Why dont people listen?

While we were at the Palace of the Popes we were lucky to see an exhibition of Contemporary African Art.

Did you know there were 9 Popes in Avignon – 7 Popes and 2  Schismatic Popes. More here on the web page Palace of the Popes

After our tour ended we had time to wander around the town of Avignon. We walked down little laneways.  Some used Segways see photo.

Down another laneway we found this.  Another blogger Julie from http://www.anotsoyoungwomanabroad.com gave a great hint.  Always look up, you never know what you’re going to find.

Eventually we found ourselves in the huge square where our lovely friend Tanya was enjoying the sunshine.

Muriel and I decided we would take in the atmosphere of Avignon and have a coffee and perhaps cake to share.

As I’m gluten-free, its sometimes hard to find something to eat. We wandered around taking in all the sights and sounds.  What a beautiful and romantic place Avignon is.  I know I know I probably say this on every blog post.  At least I’m consistent lol.

In France if your gluten-free all you need to know is Sans Gluten.  We were in luck we found a cafe that had a cake that was gluten free or Sans Gluten.  Even luckier it was chocolate!  Coffee and cake get in our tummies!

The cafe in Avignon

We both throughly enjoyed our coffee and cake.  I will say though its not like we starve on the cruise ship.

After our cake and coffee we wandered around a bit more.  We really didnt want to leave this amazing place. 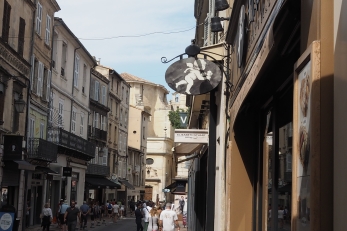 The wall around Avignon

However, we knew we had to get back to our ship as our next tour would be at the Pont-du-Guard.  On the way over to Nice I had watched the movie Paris can Wait with Diane Lane.  She was in Under a Tuscan Sun which gave me the travel urge to visit Tuscany.  Yes I will get there one day.  The movie really showed France off, more like a travel documentary than a movie.  They stopped by at the Pont-du-Guard.  When you see it in the flesh up close and personal its just breathtaking.

18 Replies to “Palace of the Popes Avignon”

Leave a Reply to Pantho The Tragic Hero Cancel reply