Peter Muriel and Tania with the Little White Train in the background.

One thing I can say about breakfast at hotels in Europe is “lots of food”.  You name it its there.  From bacon and eggs to croissants and fruit.  You can eat as little or as much as you like.  Lots of tea and coffee as well and fruit juices.

We then all went back to our rooms finished packing and met down in the lobby.  The hotel (and most hotels in Europe offer this) have room for storage of our bags.  Explore Nice without lugging around the bags.

The hotel receptionist called a taxi for the 4 of us to go into town.  We didn’t have long to wait and within minutes we were in the city. 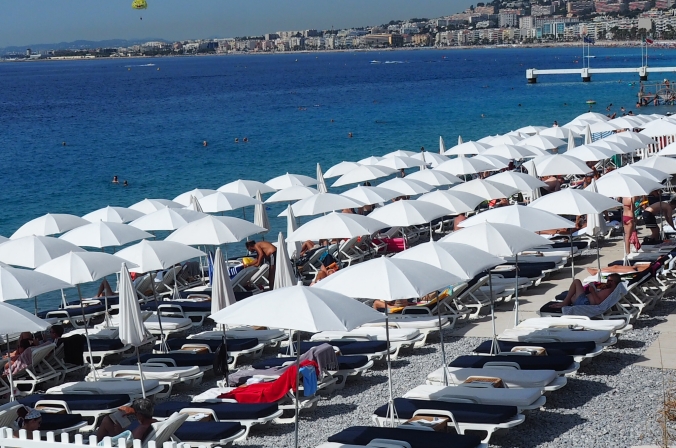 Payment required to be on this beach in Nice

The taxi dropped us of at the promenade.  The blue waters didn’t disappoint us.  The 4 of us walked along the promenade taking in all the sights.

The promenade was very busy.  Lots of people walking, running and quite a few Tour groups on Segways.

Segways on the Promenade in Nice 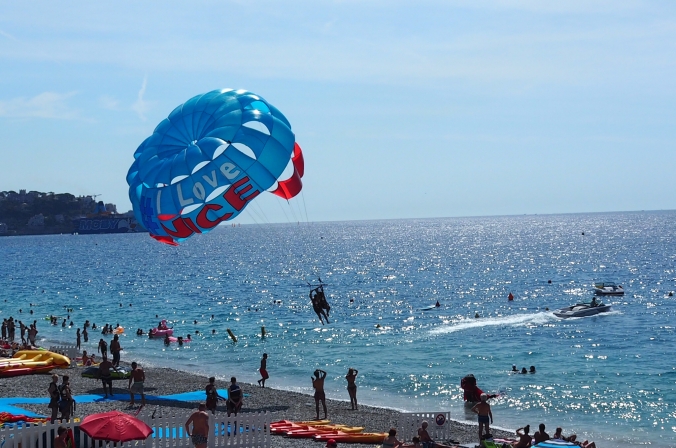 I could watch them all day.  I love Nice.  Paragliders

Muriel and I had spoken at great lengths about the Little White Train to Peter and Tania. So after soaking up the sun and all the action on the boulevard we went and lined up to go again on the amazing trip.  Doing it again for the second time I actually saw more than the day before.

We arrived up at the peak and went and took photos of the view over the Bay of Angels.

If you do nothing in Nice but the Little White Train then to me that’s plenty. On the website it says it takes 30 mins, however as it’s a busy time in Nice during summer the whole trip was an hour.

The little white train got back  to the Esplanade and we  realized that we had better find a taxi to get back to the hotel.  We were to met the  rest of the tour group at 2pm at the Nice Airport.

Our taxi took us back to the hotel and waited while we got our bags. Then dropped us at the Nice airport.

It was easy to find our tour group with the APT signs up.

A lot of our group were flying in that day.  We would rather arrive a day before just to get into the time zone.

So about 3pm we boarded our busses to take us to Arles where we would board our river ship.  It was roughly a 3 hour drive on the coach.  We stopped at one of those roadside cafes to have a bit of a walk get a cuppa.

Finally around 6pm we arrived in Arles.

The next chapter of our holiday was beginning.

7 thoughts on “Nice with Friends”

Purchased this today wholegreen Bakery Gluten Free Vegan Sourdough Bread has Charcoal and Turmeric in it. Just had a small bit very tasty. It was on special do I thought why not. #charcoal #turmeric #sourdoughbread #glutenfree #vegan #oneoff
Just a couple of Roma tomatoes 🍅 #freshisbest #tomatoes #romatomatoes #vegetablegarden #albury
Finally a zucchini from our plants. We have lift off hope we get more. Nothing like fresh garden produce. #zucchini #vegetablegarden #freshisbest #albury #nsw
Saw this amazing creature on our walk here at home. He was busy building his web. It caught my eye as the last rays of the sun caught his beautiful body. Mother Nature at her best. #spider #glowing #mothernature #albury #stunning
Spent the morning out at the lake yesterday. hear the serenity #lakehume #alburywodonga #victoria #nsw
Morning Coffee enjoying the sun before it gets too hot #coffeelover #coffee #morning #sunshine #summer #albury
Loading Comments...
%d bloggers like this: