Such a long day, left home at 6.30 am in the morning of the 27/7/16 here in country Victoria.  Arrived at the airport at 9.30am, found a cafe where  I was able to charge my phone and have a cuppa and something to eat.  Had to wait till 12.30 pm to check in so it was a bit of a wait.    I struck up a conversation with the young guy next to me, he was from the states and was waiting for his flight to Perth where he would then do a trek over the Nullabor Plains with some friends.

That 3 hours went so quickly as we chatted.  Thank you to whoever you are 🙂

Checked in and noticed I had been put in a different seat  to what we had been allocated so I sent a text to Paula so when they checked in at Perth they could be near me.

My flight to Singapore was good.  Arrived before the girls so I wandered around the airport, used the toilets.

Can I just say ‘CLEAN’….VERY CLEAN…you could eat off the floor.

Finally the girls came through the gates and we hugged and laughed and then went and had a cuppa till our flight to Zurich was to leave.

Our flight to Zurich was an airbus however we were not sitting near each other.  We were upstairs down the back.  I had 2 spare seats so we asked the flight attendants if Muriel and Paula could come sit with me.  Of course they said yes!

We talked and laughed, we watched movies, we slept.  A 12 hour flight that wasn’t that bad!

We were on our way, 2 weeks of fun, laughter and lots to see and do and eat.  We had places to visit and people to meet!!

Our flight got in at 8am and going through passports etc was extremely quick.  Our hotel was within walking distance of about 5 mins so I think we were there by 8.30 -9.  Yes very quick indeed.

Checked in to the hotel and grabbed our handbags and off we went exploring.  Caught a train into the city.  Somehow we got out of the wrong exit and ended up lost for a bit.  Managed to find our way back into the main part of the station.  Saw the WC signs so made our way to the toilets. ( later on our cruise director Eric called them Winston Churchills )

However, at the train station you must pay to use the loo.  Our pockets were empty, no franks.  So we held on, went to the tourist information at the main station of Zürich. Hoping or was it hopping that they had some toilets!  None, we had to wait, the roof was made of glass and it was so hot. The sun bearing down on us.  After a very cold winter here in Australia it was such a stark contrast.

While we were there we decided to book  into a classic trolley tour of the town and then a boat cruise on Zürich Lake.  We had a map so we knew this time which exit to leave the station.   Opposite where the trolley tour left from was a Starbucks  so went in and asked if we could use the toilets which we could but we had to purchase something.  I purchased a coffee and asked for a small cup.  Everything was huge! Even my small cup was huge.  Muriel and Paula opted for cold tea drinks.

Once we had finished our drinks we headed over the road to our Trolley Tour and away we went.  Zürich is a very clean city.  In fact all the cities and towns we went through were very clean. 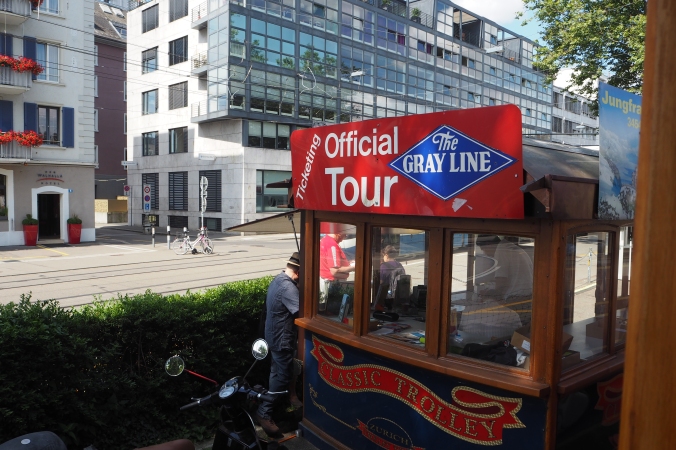 We met a lovely lady on the Tour she was heading back to Italy after spending time in Zürich with her partner.  She thought she would do the tour while waiting to fly home. 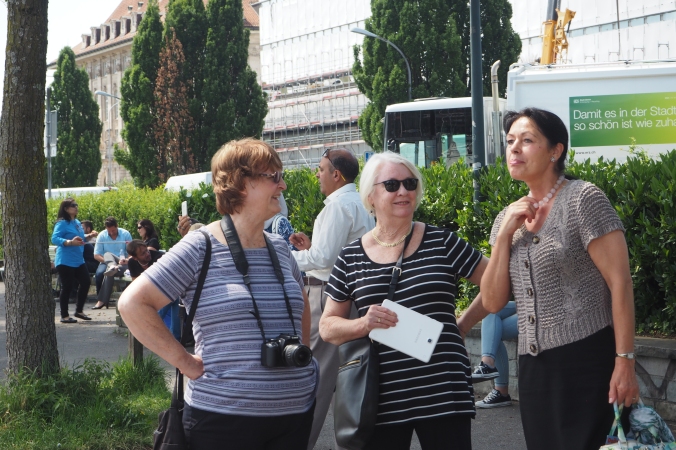 Muriel, Paula and the Lady from Italy

The lake in Zürich is huge and as it was summer, everyone was either sun baking, swimming, or boating.  The Swiss Alps surround this lovely city. 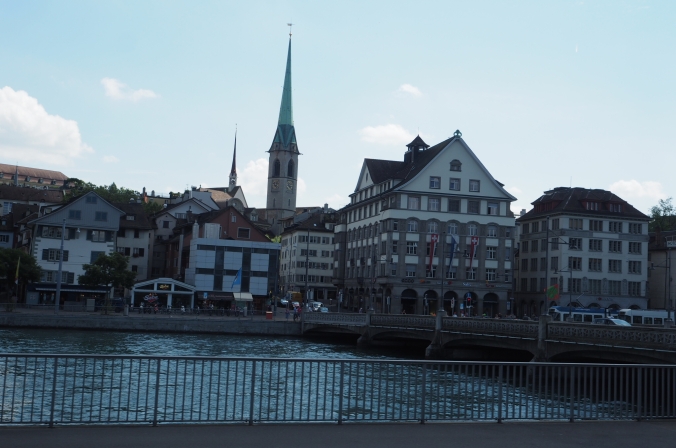 We also found a bridge – like the one in Paris with all the locks of love on it. Lovelock Bridge – Muhlesteg foot bridge.

After the Lake tour we walked back to the central station via the Old Town of Zürich, our introduction of lots of stairs.

Summer in Zurich can be very hot.  So we were on the search for somewhere to sit and eat and have a drink.  We found a pub with a huge outdoor area and it was so nice to sit under the shade of trees.  Lunch was huge!  However, we hadn’t eaten since the plane and that was hours ago.  We certainly were hungry and thirsty.

Of course once you sit and eat, then your body says its time to nap. We made our way to the train station.  Of course I thought  we were waiting on the wrong platform to get back to the hotel.  All the suitcase’s everywhere didn’t give me a hint lol – i must have had too much sun,  our station to get off was the airport station.  In Europe you can purchase either first class or second class.  As we only had a couple of stations to travel we got second class tickets.  As the train came in we realized we were in front of the first class cabins, the 3 of us had to make a run for it.  We made it!

So we are back at the hotel.  Paula and I were in one room and Muriel was around the corner from us.  I decided that I wanted to put an extra lock on our door.  Why, who knows, I think it was too much sun.  I couldn’t manage it so Paula came over and did the extra lock.

Then we discovered we were locked in our room. We rang reception for help.  They didn’t really understand but sent someone up to help, we were laughing so hard  we never heard them.  So we rang again this time we tried to stifle our laughter…

Picture this. We had tried to use eye brow tweasers  and even ice tongs to get ourselves out.  All to no avail.  We had called Muriel in her room but what could she do apart from laugh.

I went to our window which overlooked reception and pressed myself on the window and screamed help….no one heard.

Then a knock at the door, we opened it as far as we could  and a dark long  shiny hand comes around the door. That picture would have sold millions if I had stopped laughing enough to take it.

Photo moment gone…..but he was able to unlock the door.

Can you picture food being slid in that small opening of the door.  We could, at least we had TV a toilet and a shower.

That was the start of our holiday one of many laughs and tears of happiness.

Most toilets in Europe you pay to use.  May as well do what the Europeans do and go to a cafe and have a coffee or a wine or 3.